The current Mammography Saves Lives campaign in the United States and previous campaigns promoting screening for breast cancer are not providing balanced information, because they underreport, or don’t mention at all, potential harms from the procedure, say critics.

This campaign slogan is 1-sided, several critics told Medscape Medical News, and it oversells the benefits of mammography.

When asked for a more accurate headline, H. Gilbert Welch MD, MPH, from the Dartmouth Institute for Health Policy and Clinical Practice, Dartmouth Medical School, Lebanon, New Hampshire, had the following tongue-in-cheek suggestions: “Mammography could save your life, but it’s a long shot” and “Chances are it won’t, but mammography could save your life.”

Dr. Welch recently wrote an editorial in the New England Journal of Medicine (2010;363:1276-1277) discussing the benefits and harms of screening mammography, in which he reviews new data from Norway that — he says — confirm that “the decision about whether to undergo screening mammography is, in fact, a close call.”

Public information campaigns about mammography should reflect this, he told Medscape Medical News.

Another critic of the promotional campaign is John D. Keen, MD, MBA, from the Cook County John H. Stroger Jr. Hospital in Chicago, Illinois. Explaining to Medscape Medical News that he is a diagnostic radiographer and breast imager with no conflicts of interest and no axe to grind, he said he is very concerned about physicians getting a balanced picture of mammography screening for breast cancer.

In a recent communication in the Journal of the American Board of Family Medicine (2010;23:775-782), Dr. Keen writes that “the premise of a near universal life-saving benefit from finding presymptomatic breast cancer through mammography is false.”

Statistically, there is only a 5% chance that a mammogram will save a woman’s life, he points out. And that chance has to be balanced against potential harms, which vary with age, Dr. Keen continues. For instance, women who are 40 to 50 years of age are “10 times more likely to experience overdiagnosis and overtreatment than to have their lives saved by mammography,” he writes.

Dr. Keen told Medscape Medical News that he is concerned that much of the ongoing debate about mammography has been dominated by screening advocates, but pointed out that many of these experts have professional and financial interests in mammography. He is concerned that they are promoting screening without presenting the whole story.

This point has also been raised by others, including the authors of a recent article published in the New England Journal of Medicine (2010;363;1076-1079), entitled Lessons From the Mammography Wars.

There is no regulation of marketing in healthcare, they point out — “the same group that provides a service also tells us how valuable that service is and how much of it we need, as when the Society of Breast Imaging sets the recommendations for mammography.”

New Campaign in the United States

“In fact, there is no way of knowing if an individual was indeed ‘saved’,” Karsten Juhl Jorgensen, MD, from the Nordic Cochrane Center in Copenhagen, Denmark, told Medscape Medical News.

The Nordic Cochrane Center group, which includes Peter Gøtzsche, PhD, has developed an evidence-based outline of the harms and benefits of mammography. They have been very vocal in criticizing information sent out to the general public in national campaigns for breast screening in many countries in Europe, and in Australia, New Zealand, and Canada.

The leaflets sent out to invite women for mammography screening in these countries have not contained adequate descriptions of the harms and benefits, they argue; their fierce criticism led to a very public controversy in the United Kingdom last year when a government-produced leaflet was withdrawn and redesigned.

“The situation in the United States is different, in that there is no national screening program to set a common standard for information at invitation,” Dr. Jorgensen said. “It is much harder to tease out what information is given in the United States, as this may vary considerably across health plans and physicians,” he told Medscape Medical News.

“There is no doubt that screening mammography has generally been oversold” in invitations to screening and in campaigns from cancer societies and other interest groups everywhere in the world where this has been studied, Dr. Jorgensen said.

The result is that women “trust screening to reduce their risk of dying from breast cancer to an extent that is in no way scientifically justified,” he continued.

We would all like to believe that a woman’s life will be saved by mammography “if a cancer that she did not know about is detected at screening,” he said. “But in fact, the likelihood that the woman in question will be diagnosed with breast cancer unnecessarily is 10 times greater.”

“There is no way of knowing if the symptom-free cancer she was diagnosed with would ever have developed into clinical disease. And if it was destined to do so, we cannot know if the screen-detection changed the prognosis in her particular case. She may very well have survived her disease without screening or died from relapsing breast cancer 10 years later,” he said.

Estimates of Harm Not Universally Accepted

However, a leading advocate of mammography, Carol Lee, MD, chair of the American College of Radiology Breast Imaging Commission, who is quoted on the MammographySavesLives.org Web site, suggested that the estimates of harms used by Dr. Keen and Dr. Jorgensen are not universally accepted, and have been questioned by others in the field.

Some of the numbers used are “very debatable,” Dr. Lee said in an interview with Medscape Medical News. The view from the Nordic Cochrane Group is well known to be at the extreme end of a very polarized debate, she added. “We all have different perspectives and different ways of looking at data,” she said.

Dr. Lee emphasized that there is absolutely no doubt that screening reduces breast cancer mortality. In the United States, there has been a nearly 30% reduction in breast cancer mortality since the introduction of widespread mammography screening in the mid-1980s. Although there have been improvements in treatment during this time, she “cannot believe that at least part of this reduction is not due to screening.”

“Screening is not perfect,” she noted. “There are harms; there are harms with every test,” Dr. Lee acknowledged. But the discussion of benefit and harm is a very complex one. It is different for each individual woman, and the place for that discussion is in the doctor’s office, Dr. Lee insisted. Every person needs to have that discussion with their healthcare provider whenever any tests is ordered, she emphasized.

“The Mammography Saves Lives campaign does tell women to talk to their doctor,” she said, “but the bottom line is that mammography does save lives and we need to get this message out, because mammography can’t save lives if women don’t utilize it.”

Dr. Lee was referring to last year’s recommendation from the US Preventive Services Task Force (USPSTF) that made that age distinction, sparking outrage from screening advocates.

That USPSTF recommendation has been generally interpreted as questioning the efficacy of mammograms, Dr. Lee explained, adding that she has heard women around the world saying that the US government thinks that mammograms are not worthwhile. “This is very frustrating to me,” she said, because “here we have a public health measure that works.”

One of the stated aims of the new campaign is “to clear confusion.”

The message has to be clear or it will just create more confusion, Dr. Lee emphasized. Something along the lines of “mammography saves lives but it may not be a good thing for you individually” would just add to the confusion that is already out there, she argued. The campaign emphasizes the point that screening does reduce breast cancer mortality, but whether it is right for each individual woman is for her to discuss with her healthcare provider, she said.

The current campaign is better than some of the previous campaigns promoting breast cancer screening, said Dr. Welch.

Both he and Dr. Jorgensen were critical of the American Cancer Society’s campaign in the 1980s, which declared: “If you haven’t had a mammogram, you need more than your breasts examined.”

This is an example of a 1-sided campaign — it mentions nothing about the harms of screening, Dr. Jorgensen pointed out. “The truth is that mammography screening today has marginal benefits and serious harms, and that a decision not to get screened can be as sensible and responsible as the decision to get screened.”

The benefit seen was smaller than that previously reported in clinical trials, he explained to Medscape Medical News, but in the meantime, there have been improvements in the treatment of clinical detected breast cancer, and an increasing awareness among women to report any breast abnormalities. “There is no debate about the value of diagnostic mammography in these circumstances,” Dr. Welch emphasized, but there are questions about the value of screening mammography in healthy women.

“These new data from Norway are probably the best representation we have of effectiveness in clinical practice,” Dr. Welch said. They confirm the view that “the decision about whether to undergo screening mammography is, in fact, a close call.”

There is “a delicate balance between modest benefit and modest harm,” Dr. Welch wrote in his editorial, using data from the Norwegian study to illustrate his point.

Dr. Welch estimated that a 10-year course of screening mammography for 2500 women 50 years of age would save the life of 1 woman from breast cancer. At the same time, up to 1000 women would have had a “false alarm,” about half of those would undergo biopsy, and breast cancer will have been overdiagnosed in 5 to 15 women, who would have been treated needlessly with surgery, radiation, or chemotherapy, alone or in combination.

Mammography could save your life, but it’s a long shot.

“Although the current campaign doesn’t suggest that women who forgo mammography need their head examined, it remains 1-sided,” Dr. Welch told Medscape Medical News. It still focuses only on the benefit of mammography, which is why he suggested alternative tongue-in-cheek slogans, such as “Mammography could save your life, but it’s a long shot.”

“What we really need to do is develop a more balanced campaign that respects the fact that different women can make different choices,” he explained. “Since there is no single ‘right answer’ about screening mammography, our goal should be to encourage women to feel good about the answer that’s right for them,” he said. To that end, Dr. Welch suggested that the promotion of screening mammography should reflect this, and offered the following as an example of the way in which the message could be publicized. 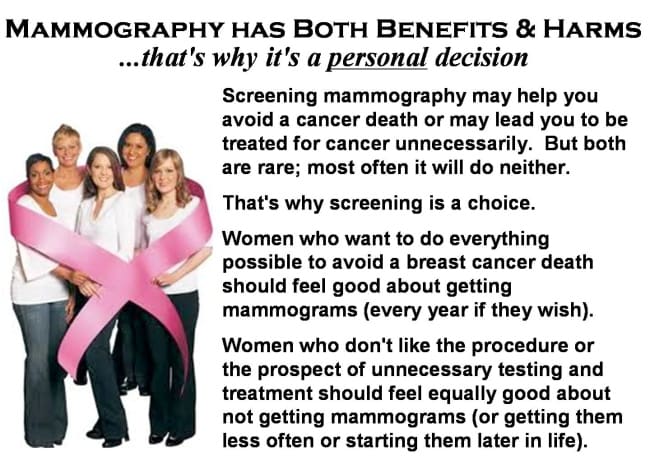 J. Kyle Mathews, MD, THE ABOVE ARTICLE DOES NOT REFLECT DR. MATHEWS VIEWS OR OPINIONS.

Dr. J. Kyle Mathews is an expert in the field of Urogynecology, minimally invasive laparoscopic and robotic surgery, and reconstructive gynecologic surgery. Dr. Mathews is board certified and a Fellow of the American College of Obstetrics and Gynecology as well as the American College of Surgeons. With over two decades of experience, Dr. Mathews is one of the most experienced surgeons in north Texas.
http://www.drjkm.com